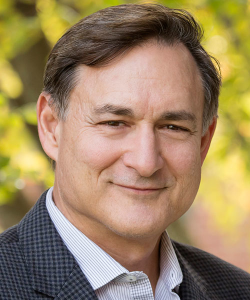 Kevin OBrien, Ph.D., is the Director of the Illinois Sustainable Technology Center and the Illinois State Water Survey. He joined ISTC in December 2013. Previously, Dr. OBrien served as president of Energy Commercialization, LLC, in the San Francisco Bay Area.

A technology expert and project manager with more than 20 years of experience, OBrien was selected after an intensive nationwide search. He has managed multi-million-dollar programs related to renewable and sustainable technologies and practices in the U.S. and abroad. His international project experience includes Europe, Middle East, and Asia. Among his professional awards are R&D Magazine’s R&D 100 award and a Federal Laboratory Consortium Award for Technology Transfer.

OBrien’s energy expertise encompasses both the supply side and demand side. He is experienced with projects involving both renewable energy as well as traditional fossil based fuels. His focus in renewables has been on the development of utility scale solar projects. As a project developer, he has brought together the necessary technical, regulatory, and financial considerations in order to move solar projects forward. He has also been involved with advisory services to the state of California and utility companies on the reduction of greenhouse gas emissions. OBrien previously built and directed an innovation program at the Stanford Research Institute which allows government agencies and private sector organizations to use their existing products and capabilities to identify new applications and expand into new markets.